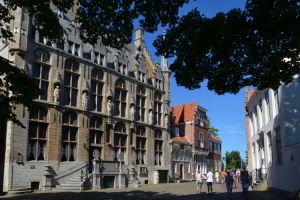 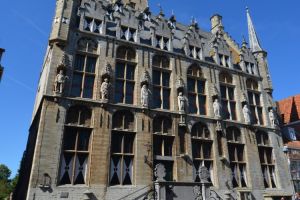 Museum Veere is established in two beautiful historic buildings: The Scottish Houses along de quay and the monumental City Hall on the Market. Together they bring the stirring history of this small city of Veere to live.

The unique 16th century statues that once adorned the façade of the City Hall are part of our collection and on display in our ‘Statue hall’. The famous gilded goblet of Maximilian shines in the old council chamber.IMG_0002

Our ‘Scottish attic’ tells the story of the long lasting trade relation between Scotland and the city of Veere. Veere was once the centre of the profitable wool trade between Scotland and the Low Countries. After considerable effort the town won staple-rights on Scottish wool in 1541, meaning that the goods had to be made available for purchase _DSC4545there for a set time before being allowed to go on sale elsewhere. This important and profitable trade right encouraged Scottish merchants to establish themselves in Veere permanently.

The ‘Vierschaar’ in the city’s old court room. Visitors can experience here how defendants were tried and convicted in the old days.

Throughout the year we have changing exhibitions that cover different parts of the town’s history. E.g. many artists resided and worked in Veere in the late 19th and early 20th century. We regularly display their work.